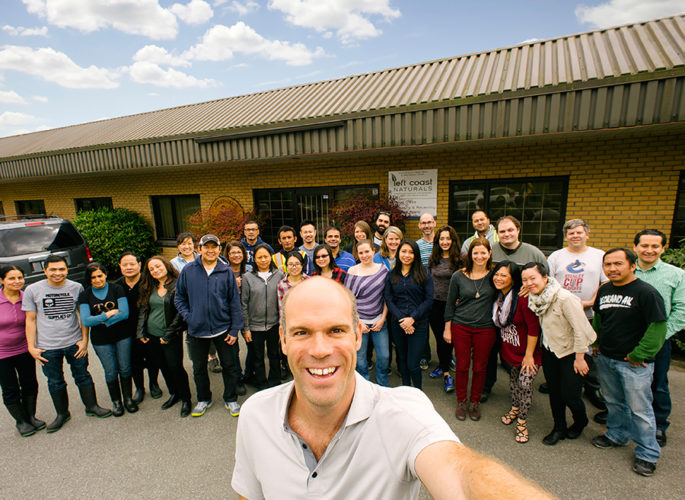 About Hippie Snacks – Our Story

Hi. I’m Ian Walker, Founder and President of Hippie Snacks. We’re a natural foods manufacturer that believes it’s our responsibility to leave the planet better than we found it. Based in Burnaby, BC on the West Coast of Canada, we have about 35 employees and our newest office dog – Stanley.

So, to begin our story we need to rewind to 1996… there were two friends diving into the early days of natural foods with a nut butter brand called Skeet & Ike’s. We started by making nut butter at night (after working our day jobs) and selling at the local market. Stores started asking for it and VOILA a business was born.

Skeet & Ike’s grew into becoming an organic snack business as we pioneered organic products in the mid-late 90’s such as Organic Popcorn, Organic Granola and Organic Trail Mix’s.

Fast Forward to 2008. We had lots of exciting product ideas for Skeet & Ike’s that just didn’t fit with the Homestyle branding of a label with a guy and a dog on the front. We were working on a line of organic tortilla chips made from ancient grains, beans and nuts and the idea blossomed into Hippie Chips and eventually Hippie Snacks. This name celebrated the 1960’s movement of eating natural foods and keeping real whole foods at the centre of our diet. Plus we were trying new things, creating new products that pushed the norms of snacking- a good old fashioned Hippie protest against regular snack foods.

We’ve continued to innovate with our Cauliflower and Avocado Crisps as well as our very latest product- Almond Crisps.

As we’ve evolved, we always stay true to our core of real foods, minimal processing, and focus on main ingredients. If we’re going to make a cauliflower snack, you bet the first ingredient is going to be cauliflower. No fillers or surprises here.

Our entire company believes in doing what’s best. This includes the way we do business, which is why we decided to become one of Canada’s founding Certified B Corporations. We embrace the whacky collection of individuals that we are, all while having fun! Our commitment is not just making great food and serving our customers, but also to doing it in an ethical and environmentally responsible way.

Be the first to hear about our new products, healthy recipes and lifestyle articles!